Whether you’re a Cadbury Crème Egg purist (bring back the Dairy Milk shells!), or you’ll take the gooey treats any way they come, you’ve probably heard of the Cadbury Crème Egg Café pop up shops. Believe it or not, these short-term engagements sold out about as quickly as Adele shows, leaving some fans with a bittersweet aftertaste. However, those who managed to score tickets to the pop up shop were treated to the ultimate sweet-fest, with confectionary delights so sugar-packed dentists would have done well to stand outside with business cards.

The Popertee team was among the lucky few to attend the Dublin engagement, and we noticed some of the innovative things Cadbury did with the event. Yes, the Crème Egg Toastie was delicious (would have been better if it was made with Dairy Milk!), but their concepts were bang on. Here’s a quick look at three uncanny things their marketing team dreamt up, so you can implement similar strategies for your own pop up shop launch.

1. They Reimagined their Product 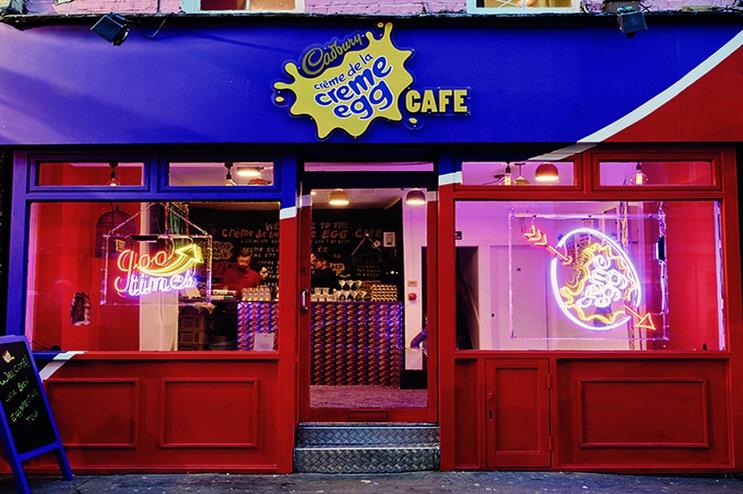 The word “reimagined” is thrown around a lot in marketing today, and it’s one of those concepts that’s easier to demonstrate than it is to explain. Rather than just selling their Cadbury Crème Eggs, which still would have sold well (or even better if they used Dairy Milk!), they turned the iconic treat into a café in its own rite. We’ve seen similar innovative ideas from brands like OnePlus; their invite-only events are handled more like social gatherings, than they are sales events. They even serve wine.

Some brands lend themselves well to zany behaviour, and Cadbury capitalized on this for their pop up shops. In London, visitors were treated to a giant ball pit. In Dublin, pun-laden music echoed through the dining area, as “Egg” treated us to tunes from the musical “Cadburet,” formerly known as Cabaret. Similarly, Target stores added a punch unexpected silliness to their holiday pop-up, by giving shoppers digital carts, and dropping their purchases down the chimney after their purchase was complete. These kinds of touches create engagement, which is great for sales and building customer loyalty.

3. Gaudy Branding Can Be Fun

Like play, overzealous branding doesn’t work for every company, but it did for the Cadbury Crème Egg Café. Every last inch of the building contained a reference to the brand, from the giant egg atop the building, to the exterior paint scheme, the pillows on the sofa outside, and various bits of artwork inside, all paying homage to “goo.” As far as we know, no other company has been so over-the-top with their branding, but for Cadbury, the decision sure paid off. Even the building became a major attraction, with surprised travellers stopping to pose for selfies beside the famed purple and red façade.

If the unexpected can wow people despite the recipe switch-up, imagine what a little reimagining can do for your shop and product sales. Dairy Milk debate aside, Cadbury nailed it with the marketing and branding on their recent round of pop ups. Even if your product sells itself, take a page out of the Cadbury book, and add some zip to your next launch.

If you still need a venue for an upcoming pop up shop, or if you have a space you think would make a great short-term space for someone, stop by our site. Popertee has officially launched, and we’re working our own magic matching up entrepreneurs with the ideal space for their needs.